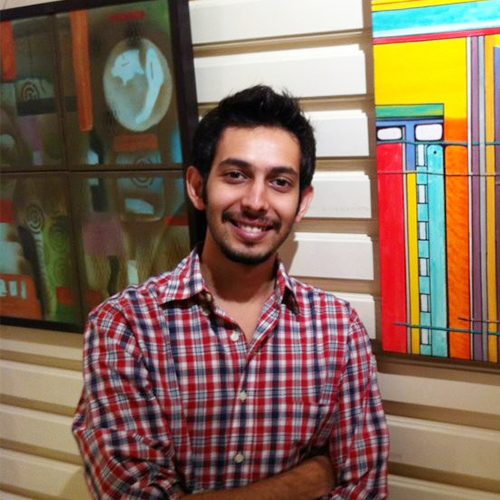 Jai Ranjit is a self-taught artist who lives and works in Mumbai, whose work mainly deals with trying to express the intricate goings-on of the Human Mind. With five solo shows and several group shows in three cities across India under his belt, Jai is constantly on experimental path, trying to understand styles and combinations that might better explain a particular concept, emotion or notion.

With a love for teaching, Jai is always encouraging young and old to pick up the brush, be it to satisfy a creative yearning, or to gain from the therapeutic powers of the arts. Jai enjoys photography and writing, and is part of several art and photography groups in Mumbai. Jai has also introduced a new avenue of art exposure: “#ArtAuction” on twitter, where people from around the world can bid for small to mid-sized paintings within a set time frame, something that has gained some following in the major metro cities of India as well as articles in the print and online media. He started painting in 2007, and has been into Academics since 2009.

His experiences of workshops, art camps, commissions, exhibitions etc. are rich enough to give a holistic approach to students about the subject and fraternity. He has held talk sessions on Art in the past at The HIVE and with Writer’s Bug. He had an association with Mod’Art International Fashion Institute as visiting faculty. Jai has contributed in Kala Ghoda Festival as well.

His paintings and murals are part of some premium properties like Cool Chef Café, Worli, Mumbai, Bombay Stores, Mumbai etc. They also have leverage of getting associated with eminent personalities like Ravi Pillai (head of RP group), Amit Talwar, (Renowned Fashion Designer) Bobbie Vijayakar (Architect), and others.